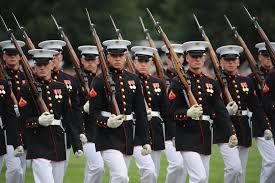 Toerag also said he thought he spoke for everyone in his platoon when he said that they were all deeply worried the war on terror would be over before they got their chance.

Towe said he didn’t understand why anyone would carry out a mass shooting in America ‘when he can get paid for doing pretty much the same thing in one of the shithole countries the president doesn’t like’.

“It’s tricky for Mr. Trump to defend you, if you do it on home soil,” he explained, “but he’s proven he’ll go in hard for you if you off a bunch of Ali Babas and as a marine, I’d like to say a big Tango Yankee to him for that.”

Walter added that he had absolutely no fears about going into combat.

“My unit’s got a fat guy, a guy who’s a natural clown and a guy who’s due to get married at the end of his tour, so I figure I’m easily gonna be one of the guys who makes it back?”