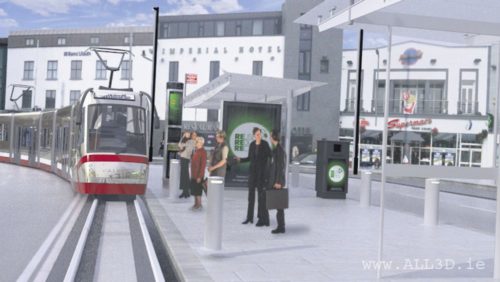 “Anyone who thinks Galway’s ever going to get it’s own Luas, is seeing things in the bottom of their glass,” the proprietor of The Ramble Inn Eamon Halligan announced last night.

“Glug, glug, Gluas,” Guiney replied, while waggling his empty glass at Halligan in a move that allowed him to both agree and reorder at the same time.

“Between five and seven it’s a total choke-fuck?”

The Ramble Inn’s teatime-drinkers silently considered the propriety of a 38 year old marriage counsellor using such a phrase, before collectively deciding to ignore it.

“All I know,” Guiney observed, while preparing to ‘lorry’ another pint into himself, “is if marriage is a two way street, then mine is like the traffic on Lough Atalia?”

“Going nowhere?” Halligan winked, as he wiped the counter in front of Guiney, “boom, boom!”