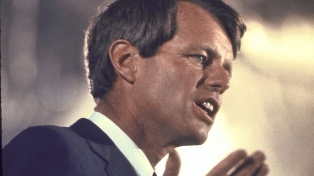 The makers of a Netflix documentary about the life of Robert Fitzgerald Kennedy, have been forced to deny it’s a “magic white man” story they made up, just to oppress African Americans.

All the major race relations organizations have welcomed the release of ‘Bobby Kennedy for President,’ a four-part docu-series which launches globally, on April 27th.

However young blacks in the most deprived area of Indianapolis, where Kennedy spoke the night Dr. Martin Luther King Jr. was assassinated, insist they are “not buying this honky bullshit”.

On 33rd street, in the heart of the area known as ‘Sudden Death,’ neighbourhood rapper ‘Lil Tornado’ said he felt he spoke for the city when he expressed his disbelief.

“Y’all tell us some cracker shoot MLK but the hood go home all nice and quiet and shit, just ‘cos some Mick tell ’em to? Lemme tell ya something nigga, you smoking crack if you think we gonna buy that shit!”