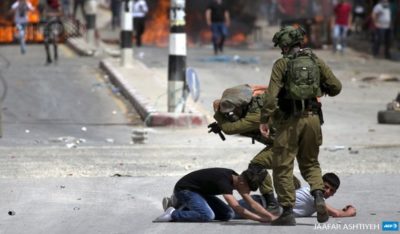 Israel tonight warned viewers around the world not to be swayed by ‘clever arguments’ highlighting the country’s typically disproportionate response to what security services call “provocations by Palestinian extremists”.

This is understood to refer to an incident widely reported on by Israeli media which highlighted the fact that during a week of growing tension – which eventually led to a week long bombing of Gaza – “stones were thrown at an Israeli car”.

“Yes, it’s true that at least 55 children have been killed in Gaza since Monday, including eight young cousins who had gathered to celebrate Eid with their mothers,” a spokesman told a press conference “but don’t forget who started it, those Palestinians who threw stones at an Israeli car!”

“Isn’t Israel continuing to punish the Palestinian people of the middle east,” a reporter asked, “for the Holocaust inflicted on the Jews in Europe?”

“To even ask such a question,” the spokesman replied, “is antisemitic”.

“You can’t say the question is antisemitic,” a member of Jews Against The Occupation shouted, “you can’t abuse the word like that”.

“Yes we can,” the spokesman snapped, “because when we use a word, it means just what we want it to mean.”