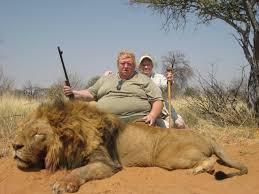 “We meet again Simba, my old friend” Boston dentist John “Jumbo” Ryan whispered, before firing an armour-piercing round through an old, near-blind lion heading in the opposite direction, almost a kilometre away.

Perched on a protected hunting platform on the roof of a land rover and supported by a crew of three local guides ( also armed with state of the art, long distance hunting rifles ) Ryan whooped, as he celebrated his “kill”.

Gesturing towards the far distant carcass of the animal that had never once been aware of his existence, Ryan solemnly claimed, “I think in this deadly duel, this gladiatorial contest, each of us respected the other?” as he waited for the support crew to deploy the hoist that would safely carry him back to ground level.

The guides swore and grunted, as they grimly struggled to lower him while Ryan swayed gently in the harness, like an enormous child, adding that, “It feels good for a man to be tested in the hunt and not found wanting?”

“Of course the goddamn liberals can’t understand a warrior’s primal need to prove his courage in battle”, Jumbo snarled, as he wolfed down the low fat, gluten-free meal the cook had swiftly prepared for him on a state-of-the-art mobile barbecue unit.

On the return journey, the guides suddenly shrieked and clapped noisily in the back, after the cook gestured at Ryan and whispered “three lions could live off this bloater for a whole week”.

When Ryan, intrigued by the disturbance, inquired what the joke was, the head guide winked at them and then, turning to Ryan, solemnly said “The men are elated, Sir. They celebrate your victory because they believe you are truly a great hunter who will bring luck and honour to their families and their village. They say you may even be eligible for a bravery award?”

When he heard that, Jumbo sat back with a broad smile and allowed himself to imagine the award ceremony.

Shooting Fish In A Barrel Takes America By Storm