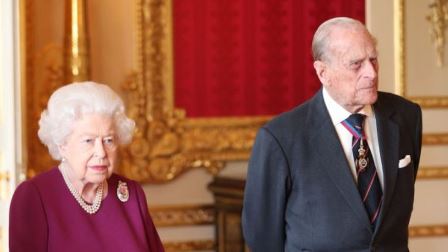 In an ancient, time-honoured royal ritual, Prince Harry bagged up his son’s first, still-hot dump and abruptly chucked it at the queen, yelling ‘Catch!’

Her Majesty is believed to have caught it, cackled and just as quickly thrown it to Prince Philip who wrinkled his nose and grimly instructed an aide to ‘keep it for the Prince of Wales…he’s into organic shit!”

The touching scene occurred after the young Archie Harrison Mountbatten-Windsor ‘s parents held a meet-the-press for the Queen’s eighth greatgrandchild.

With a few honourable exceptions, the British press parroted “the firm’s” idiotic suggestion that he will grow up “just like a normal boy because he won’t have a royal title”. As if the name Mountbatten-Windsor was on a par with Smith-Jones and being 7th ‘in line’ to the throne was a run of the mill detail.

At time of going to press, conspiracy theorists were zeroing in on the fact that Archibald is an anagram of ‘arab child’ but were unable to make anything further of this entirely random coincidence.