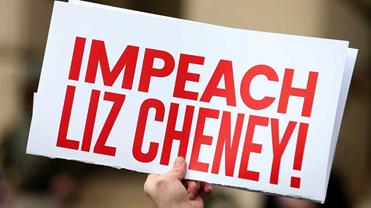 A last minute obstacle to Wednesday’s planned showdown over Liz Cheney emerged today, with the news that party managers have been unable to locate the soul of the GOP.

While a growing list of governors, senators & house members continue to claim custodial rights over it, none can describe its location, much less make a convincing claim to ownership.

Panic broke out this morning, after Liz Cheney said “It is safe with me and my father” while Kevin McCarthy immediately insisted “It is in the eminently capable hands of Mr Trump”.

Trump quickly responded by demanding McCarthy say it was buried “deep in the heart of Texas”. However no sooner had McCarthy done so, than he demanded he now say it was “in the middle of the night” and subsequently, “in a New York minute”. All of which he did.

Since then, there have been calls for the country’s borders to be sealed, to prevent it being smuggled out of America and held hostage by a foreign power, hostile to the USA.

Speaking off the record, a spokesman for the Communist Party of China, said the soul of the GOP, along with the soul of America, were both safe in Beijing, to whom they’d long ago been sold by their respective owners.

Meanwhile, the vote to recall Liz Cheney, has been described as a war between ‘Trumplicans’ and everyone else in the party.

‘Everyone else’ being shorthand for republicans who are not yet ‘members of the new religion’.