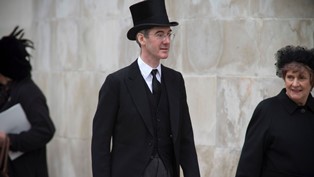 The actor Boris Johnson is now said to believe Rees-Mogg’s ‘hiss at the poor’ image, has greater appeal for the Tory heartlands, than his own ‘jolliest old-Etonian in England’ persona.

“Everyone knows,” said a man who once ‘fagged’ for Boris, “that it’s all about name recognition? It’s great fun when Boris drops by but once ‘the child catcher’ has been to your town to spit at the disabled, you don’t easily forget it.”

The ‘child catcher’ is another of Rees-Mogg’s nicknames, one that is said to cause a thin sneer to spread, almost against his own volition, across his cruel patrician face.

Aside from a spike caused by last January’s revelation that Boris was descended from the mummy of a body discovered in a Swiss church, one media analyst observed, he’s been eclipsed on practically every other single occasion, by Rees-Mogg.

Johnson, who friends acknowledged has gained unparalleled mileage, ‘simply from ruffling his normally tidy hair before speaking to gullible journalists,’ is taking the threat seriously.

They believe this is what really lies behind his claim that Russia hosting the world cup, will be like the 1936 ‘Hitler Olympics’.

Although in private even they acknowledge, he simply can’t pass up an opportunity to liken himself to Churchill.