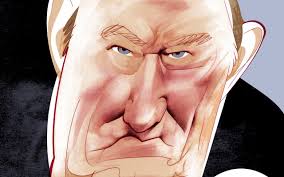 Boris Johnson says he’s now ready to follow through on the ‘solemn campaign promise’ he gave to the people of Great Brexitland, to sit down with BBC Dragonslayer Andrew Neil before the election, for a comprehensive interview.

“A chap doesn’t make a promise to the people of this great nation of ours and then try to wriggle out of it,” he said outside No 10 today.

“I mean, one’s word is one’s bond and all that,” he gurned in the full-on PG Wodehouse style that focus groups have repeatedly shown, the ‘most discerning electorate in the world’ adores.

“I’ve never broken a promise yet and may I just say, I hope I never shall. Aunt Agatha would eat me for breakfast, if I did.”

Afterwards an aide confirmed the Neil interview would be broadcast live on BBC Radio Shetland, ‘at the same time as the Queen’s speech’.

But he also insisted the prime minister had never agreed to do an interview with Neil.