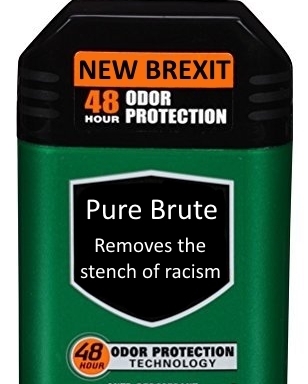 The personal grooming products manufacturer Brut, has launched a ‘Brexit deodorant’ it says will conceal the smell of racism and sexism.

Pure Brute was launched by Jacob Rees-Mogg who admiringly remarked that ‘it even removes the smell of servants’.

The product is the result of a nationwide survey which found that leading Brexiters are aware of the movement’s image problem amongst those who haven’t gone to public school.

While wealthy Old Etonians don’t notice the moral stench of Brexit, they recognise that huge swathes of middle and working class people, remain troubled by it.

In an attempt to broaden the movement’s appeal, its main backers have approved the plan to neutralize its odious dog-whistle stink.

The company says the move was prompted by fears that the four tory party leadership contenders who will promote the product but also beat their wives regularly, would otherwise not endorse it.

Referencing the contest as he posed for a photo with the new scent, Rees-Mogg shouted ‘May the right-wing man for the job, get it’.