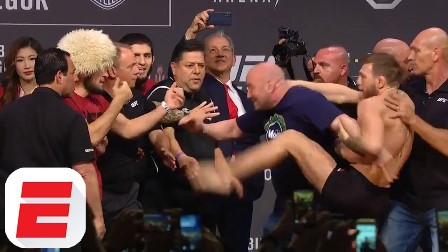 Close Trump ally and UFC president Dana White has spoken of his “great sorrow” over allegations that the ugly finish to the McGregor-Nurmagomedov cage fight, was a “win-win situation” for him.

“I take it personally whenever anyone tries to put words into my mouth about cage fighting,” he said, sorrowfully.

White said he was simply acknowledging the hard commercial reality that ‘the scenes outside the ring would be worth millions inside the ring’ in any future rematch, even though they had ‘so very nearly tarnished my much beloved sport’.

Meanwhile, customers in McGregor’s ‘favourite pub,’ The Black Forge in Dublin’s Walkinstown were unambiguous about his post fight claim that he had ‘won the battle’ with Nurmagomedov.

“With all due respect,” one said, “if I ever get into a fight on me way home at night, I sure hope I don’t ‘win’ it like that?”