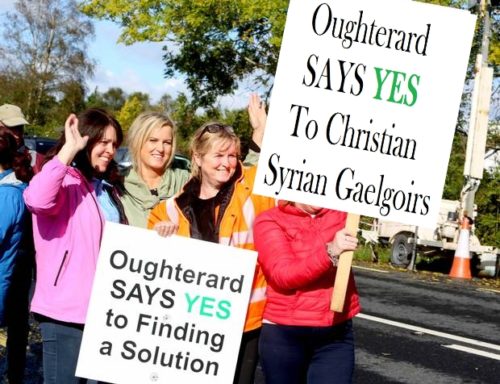 The inhabitants of the picturesque County Galway town of Oughterard were nursing a special hurt last night, after learning their campaign to fix Ireland’s broken asylum system, had been rejected.

Independent TD Noel ‘Golfgate’ Grievance, who has campaigned tirelessly on the issue, wept openly when he heard the news, describing it as ‘particularly heart-breaking for an anti-racism campaigner like myself’.

“After being told we couldn’t just ‘cherry pick’ Syrian Christians for Oughterard,” he sobbed, “we widened our request to include set dancing, Syrian, Christian gaelgoirs and sean nós singers with a strong Connemara blas,” he said, “but cruel civil service mandarins slapped us down.”

Deputy ‘Atticus’ Grievance, as he is known locally, pledged to continue his campaign on behalf of native Irish speakers trapped by the war in Syria.

“These are our people,” he emphasised, “and we need to take our share!”

Locals said they were ‘in shock’ that their sincere attempt to reform the asylum system was ‘somehow’ being blamed for the decision to abandon a planned direct provision centre in the town.