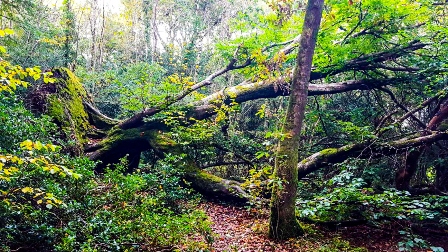 Although Shauna ‘Shocks’ O’Shaughnessy would not divulge precise details of the deal, she said when she met boyfriend Danny ‘Budgie’ Browne three months ago, “promises were made, if you know what I mean?”

O’Shaughnessy said the 21 year old Browne had then sworn that before the summer was over, they would “walk through the rainforest hand-in-hand”.

Last weekend the 19 year old revealed she felt Budgie’s offer of a weekend camping trip to Barna Woods, fell a long way short of his promise to make her dream come true.

As a result, Shocks added, “the tap” has been well and truly turned off!

She then winked heavily, adding “if you know what I mean?”

However approximately one week later, she admitted she was beginning to reconsider her position.

She explained that “Lately Fifi has begun to feel pretty…twitchy?” and she’d concluded she might have to extend Budgie’s ‘credit’ for a short interval.

“At the very least,” she mused, “we’d have some privacy? Because it’s not like we get any on the sofa in his brother’s place.”