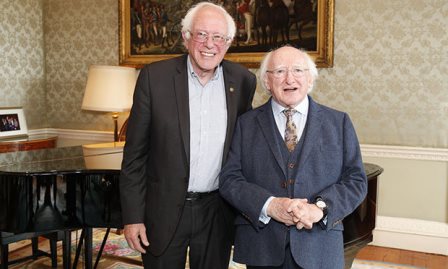 Polling on the public’s indifference to the tide of B-listers ‘whose only wish is to serve,’ has prompted a wave of defections from this noble calling.

Barrister Noel Whelan, the latest to announce he won’t run, did so in such intensely ‘legalistic’ language that one paper reported, ‘Niggeldy Won’t Face Miggledy’.

Another paper ran with, “Micheál Martin Comes Over All Wriggledy (To Stop Bertie Ahern’s Run At The Presidency)”.

The surge of carpetbaggers running, includes candidates seeking to parlay careers in motivational speaking and community activism, into a larger salary.

Today’s papers made fun of all of them. Business man Gavin Duffy was described as a ‘charisma free, wannabee’ while Sinn Fein were said to be ‘only interested in free publicity’.

A handwritten statement issued earlier today, welcoming all contenders to the race for the park, was made by the president himself.

One paper characterized it as, “Miggledy: I’ll take on the lot a ye! (Squiggled he.)”