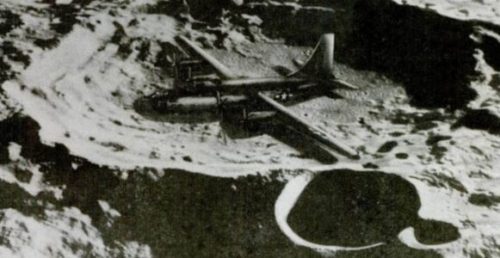 The Lancaster bomber discovered on the moon in 1988, has been illegally removed by China’s Chang’e-5 lunar mission, it was announced today.

In a sensational development, NASA said that it believes China, a world leader in miniaturisation technology, successfully shrank the aircraft to a size it was able to fit inside the capsule returning to Earth.

The retrieval of the plane’s ‘black box’ is a major coup for China which will allow it to study exactly how wartime Britain was able to send an unmanned craft to the moon, long before America.

It’s thought that Operation Ancestral – an anagram of ‘Lancaster’ – was devised to test if the British Government could be evacuated to the moon following a Nazi invasion and co-ordinate the resistance from there.

Declassified papers from 1940 reveal that on learning of the mission’s success, the King was reported to have told a footman, “Please inform her majesty I shall require relations tonight”.

The wartime mission is believed to have been the inspiration for the 1979 Bond movie Moonraker, starring Sir Roger Moore.

News of its success was kept from the public until 1988 when Russia disclosed its existence to the Sunday Sport newspaper, in a bid to distract attention from the first Nagorno-Karabakh war.

On April 24th of that year, the paper’s front page carried the headline ‘WWII Bomber On Moon’ and revealed that the White House was ‘strangely silent’ on the matter.

The paper also claimed “The Russians are prepared to splash out billions to send Cosmonauts up to investigate”.

NASA later revealed astronauts visiting the moon from 1969 onwards, were given strict instructions not to photograph the plane.

On hearing the news, outgoing President Donald Trump said “I’m googling everything I can about it because it’s not the first time China has done this to us”.