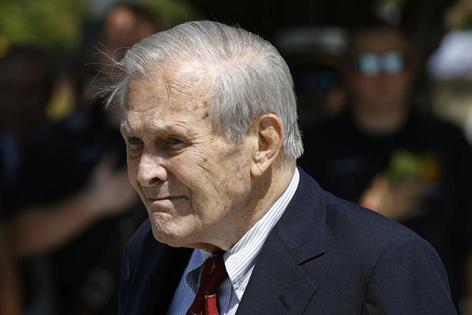 “Doesn’t it seem at all odd to you, the way Donald Rumsfeld suddenly died, totally out of the blue, like that?” 28 year old conspiracy theorist Doug Anders who is also a self described ‘freethinker,’ said last night.

Mr & Mrs Anders who would sincerely like their basement back, wearily made non-committal noises, in reply.

“Surely you’re not naive enough to think a man who was alive one day and dead the next, died from natural causes?” Doug sneered.

Retired accountant Tom Anders timidly muttered “unknown unknowns” half under his breath, without looking his wife in the eye, in the vain hope it might mitigate an all too familiar tune.

“All I want to know,” Doug said sadly, “is what they’re not telling us…and why. Simple as,” he said, shaking his head.

“Doug honey…” his mother began before she was cut off.

“We’re supposed to believe that a man who had access to all the intell he had, would just be let wander off to die of somewhere of “natural causes,” he said in a heavily sarcastic tone while, using his fingers to signal the last two words were in quotation marks.

“I don’t think so but then again I may be wrong. I suppose there are places where that might happen…the United States of Narnia maybe or the People’s Republic of Shangri-La?”

Doug then went on to angrily outline how no government could afford to risk having a former Defense Secretary divulge critical intell to nurses – who in all probability were Chinese agents – on his deathbed.

“If in fact, he actually was dying,” he added “because you have to wonder if he’s dead at all?”

After dinner, Doug described his parents as “Well meaning patsies, the kind of people who believe in the moon landings”.

As soon as he’d gone back to the basement, Tom Anders explained that Doug had been an anxious child and that conspiracies were a source of comfort to him.

“He’d rather believe some all powerful group is secretly controlling the chaotic world we live in, rather than the much scarier idea that nobody is…”