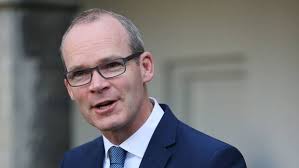 “Not that Nicholas Medforth-Mills is a minor,” he hastily explained.

Coveney said it was “a very great honour, indeed yes, to meet Nicholas – I think I can call him that, I know I can, now that I’ve met him – who is 94th in line to the throne”.

However the deputy Fine Gael leader, seen hobbling around Leinster House earlier, stressed he’d been desperately fighting to keep his mind off royalty since, “for entirely understandable reasons!”

Royal Cork Yacht Club members who had gathered at their clubhouse where they were eagerly awaiting Simon’s personal account of the meeting, were all described as being, ‘absolutely ready to pop with excitement’.

Speaking before the Tánaiste addressed the members, close confidant Senator Tim Lombard said the presence of new Garda commissioner Drew Harris, had made the meeting “even more special and exhilarating!”

Harris previously served as Deputy Chief Constable of the Police Service of Northern Ireland from 2014 to 2018.

“As you can imagine,” Lombard confided, “under the circumstances, poor Simon hardly knew which way to look”.

“He said it was almost like meeting the Queen and 007 on the same day!”