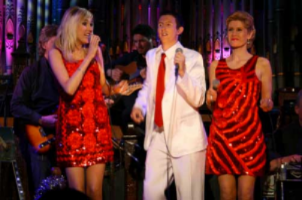 “Any God that could countenance the depravity of Crystal Swing’s existence, would be utterly devoid of all mercy,” evolutionary biologist and best selling author, Dr. Richard Dawkins said last night.

Dawkins told the Royal Academy of Sciences he had just returned from Ireland where evolution briefly appeared to run backwards for the three minute duration of a performance by the “Country & Irish family showband” on the Late Late Show.

“After the initial shock,” the Selfish Gene author said, “we had to sit there in our own urine, as it slowly went cold. Watching the spectacle, I cursed the superstitious producers of the show, so in thrall to an ancient format, that it has become a religion for them.”

“The Late Late show I observed,” Dawkins declared, “has precisely the properties one should expect if there is, at bottom, no design, no purpose, no evil, no good…nothing but blind pitiless indifference”.