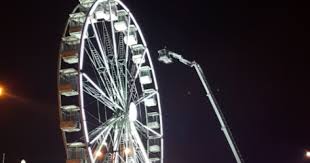 “I seen it on the news lasht night,” Liam Finn bayed at reporters this morning, “Galway looked mightaa on the tellaa, so it did”.

Finn confirmed he was referring to the terrifying ordeal that had made national news the previous day, when 20 adults and children were stranded upside down on a Ferris wheel for hours, in freezing rain.

News crews reported some had symptoms of hypothermia by the time they were freed while the smaller children were additionally traumatized by the arrival of wailing sirens and flashing lights.

Asked if he was worried that the ride had been described as ‘a major public safety hazard,’ Finn who was holding his third child in his arms, replied, “Sure it might never happen!”

Turning to gesture at the crowds queuing behind him, he added, “Ya can’t live your life afraid ta go outta yer house in tha mornin?”

When told the owners of the wheel had been planning to pack up and go home, following what they fully expected to be a publicity disaster, he pointed dramatically at the nearby scruffy Christmas Market which had all the seasonal cheer of a refugee camp in a war zone.

“Look at all that? Wouldn’t it be an awful shame if it was cancelled”.

Mr. Finn revealed he had travelled in from Portumna, Co Galway early that morning, to give his family ‘the thrill of a lifetime,’ after viewing the nightmare endured by those marooned on the Big Wheel.

His wife Bláithín said she wouldn’t ‘actually’ be surprised if Druid wrote a play about it.