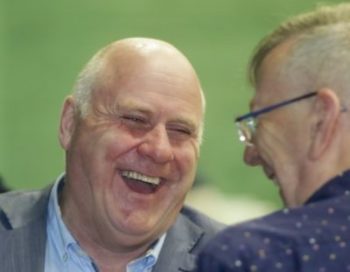 Deputy Noel ‘Sleeveen’ Grievance – aka ‘the Lion of Oughterard‘ – remains distraught he might be seen as racist by cynical people.

‘Atticus’, as he’s also known, confirmed he’s ‘still waiting’ for the World Bank to get back to him about the now widely-accepted-as-inaccurate figures he quoted from the bank’s website.

But Galway’s greedy Golfgate organiser – who last year claimed most African asylum seekers are economic migrants ‘sponging’ off the system’ – is a massive sponge himself.

Grievance claimed €10k in expenses for ‘policy formation’ alone last year and a massive €41k in ‘unvouched expenses’ for 2012.

Now he says he knows he has let himself down.

“Not only myself,” he added piously, “but also the voters of the Galway-West constituency, so I’m determined to change their opinion of me.”

“And I sincerely hope to do that”, he laughed, “by shifting the blame for organising ‘GolfGate’ onto Donie Cassidy’s shoulders!”