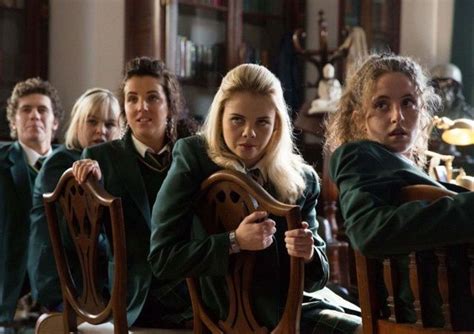 Derry Girls slang has you baffled because you’ve never heard any of these strange words and phrases before, right? So to help you all out, we’re going to open a window on what they’re actually saying. I guarantee, you’ll never have heard of any of these weird terms that are found in every English language dictionary, ok?

First one up is “the craic”. I know what you’re thinking but no, it has nothing to do with drugs! It simply means ‘fun’ but it can also mean ‘news’. Next up is “banjaxed”. This means broken or tired or drunk. (Take a break now and have a sip of water, if we’re going too fast for you.)

To be “buzzing” means to be excited or delighted. Our dictionary says a good example of this is, “The room was buzzing with excitement”. Bet you didn’t see that coming! It’s a great example of the kind of impenetrable slang used in this great series that you’d struggle to follow without a guide like this!

Another weird one is to “do a runner” but it doesn’t mean to take part in a race. Oh, no! What it actually means is, to leave in a hurry, often without paying a bill. Next up is one you’ll never hear outside of Derry? It’s “fluthered” and it means drunk but no matter how many times you’ve heard the song ‘Phil the Fluther’s Ball‘, you won’t have understood it.

You may be familiar with the Scottish phrase, “Give ma heid peace”? (Spoiler alert: that’s a big hint for our next mystifying phrase!) Because “Give my head peace” is Derry slang for, ‘leave me alone’ or ‘stop annoying me’. Don’t kick yourself if you didn’t see the connection – these ‘Derry phrases’ are absolutely mindboggling.

One of the most popular and also possibly the rarest slang phrase ever to be used is, when someone is described as “a ride”. This little known phrase which linguists estimate only three people outside of Derry understood five years ago, is now widely known and used, thanks to the show. (Have another sip of water if your mouth is gone dry with excitement at all this new ‘underground’ knowledge?)

Adding to our list of totally baffling phrases is the classic, “no bother” which means something is ‘no bother’. Don’t worry if you didn’t see that coming, it’s practically impossible to deduce its meaning from the phrase itself. The same is true of our next word, ‘a prod’. Now if anyone asked you what a prod meant, you’d probably say, it means the same as a poke. But you’d be wrong! It’s a slang term for a protestant and even northern Ireland’s protestants use it to describe themselves, from time to time.

The next one up might sound familiar but it’s not as straightforward as it looks. “Raging” means really angry. You were probably wondering if being in a rage has anything to do with raging and if you were, then well done you! Because raging does mean being mad with rage and therefore, raging mad. Not that you’d ever have been able to work out what this phrase means, without our guide to the Derry Girls slang. No need to thank us. Lols!

We’re in similar territory with another uniquely peculiar to Derry word, “sauntering”. Hang on a minute, I hear you say, has that got anything to do with the verb ‘To saunter’ which is a common synonym of ‘to stroll’? If so, you’re right, ‘sauntering’ does mean ‘strolling’! Now, if I said to you, like some game show host might, “Your last answer was ‘Spot on’,” you’d be lost, right? Wrong!! Because ‘spot on’ means correct or accurate.

Which brings us to “Taig”. Taig is a word you won’t have come across before, even if you’re from Derry. Because it’s a secret term of abuse for Catholics that only Derry “prods” know and use. Ok, that’s the ‘politics’ bit over, time for some fun! Something all the “taigs” know and love is the Tayto Cheese & Onion Sandwich: This little known local delicacy is a sandwich made with, yes, you guessed it – a packet of Tayto Cheese & Onion. But in no way is it to be confused with the well known concept of the ‘crisp sandwich’ which is a very similar but still slightly different concept because you can use any kind of crisps to make one of those.

A word that goes back into the mists of Scottish antiquity is “wain” which means a small child. You’ve probably heard it used a million times in Scottish movies and comedies. Yeah, you’re probably thinking but how does that help me understand what it means in Derry Girls? Well, I’m hear to tell you it means exactly the same thing!

Finally, I’m gonna end this exotic journey through the cryptic words and phrases of Derry Girls with one you can use next time you want to tell someone to mind how they’re treating you. It’s ‘watch yourself’. Please do!