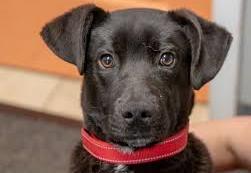 ‘Architect’s wife and mother of two’ Iseult O’Malley made the claim this morning, to next door neighbour and close friend Margaret Carberry who has an online diploma in Life Coaching.

Over a pair of single-shot oatmilk-lattes in the Herbert Park Hotel, she also complained that “he spends more time talking to it, than he does to me”.

“And he’s absolutely delighted whenever the mutt cracks one of his room-clearing farts,” she added, wrinkling her nose to emphasis their potency.

“What is he like…” Margaret replied absent mindedly, as she played with her hair and wondered if there was really any such thing as a language barrier.

“Then he says I’m being mean if I ask him to put it into the shed!”

The slight rise in inflection alerted Carberry to the fact that her lack of interest in the conversation had been noted.

“Spock‘s a cock-block,” she winked, referencing the family’s black Labrador, “is that what you’re saying?”

After the briefest of pauses, O’Malley coldly observed that she didn’t want to be late for her Zumba class but Carberry was already on her feet muttering, “I’ll get this?”

Carberry later confirmed details of the encounter but stressed that she is no longer ‘actively coaching’.

“You’ve got to remember this is a very young dog,” O’Malley’s husband Dave subsequently told the newsdesk.

“Come back after he’s been dry humping my wife’s leg for 20 years,” he grimaced, “and I’m pretty sure he won’t be quite as keen then either?”