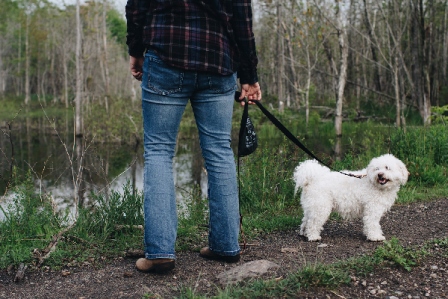 Neighbours confirm Stephen Ryke (58), has walked the dog with the same poop bag for seven years but never once used it.

The ‘eco’ bag was a gift, they allege, which he uses as ‘urban camouflage’ to deflect attention from curious eyes.

“If you conspicuously carry a poop bag, especially an ‘eco‘ poop bag, everybody assumes you use it, right?” Emma Tyrell said, “It’s genius”.

But Trump apologist Ryke was quite careful, she added, not to let Giuliani shit on his immediate neighbours’ front lawns.

Asked how she could possibly know this, Tyrell said “He told me…he’s actually proud of it!”

“President Trump,” she spat, “who calls that corpse fart ‘President’!”

At time of going to press, she said she wouldn’t be at all surprised if the neighbourhood’s very own Nazi who is now known as ‘the Turd Ryke,’ was anonymously ‘outed’ on social media by some concerned citizen.

Ryke had no comment to make when informed of his nickname, other than to say “Be sure to tell the peasants the correct pronunciation of ‘Reich’ is ‘Rye-ssh,’ won’t you.”