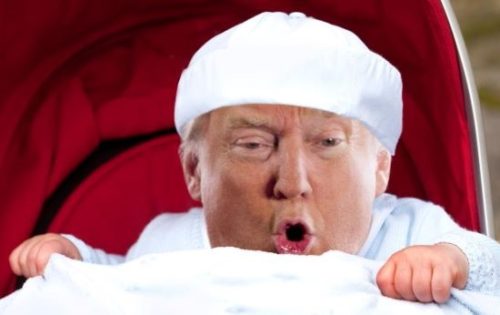 The president lashed out at the ‘fake news media’ today for not giving him credit for “keeping Americans safe”.

“I broke the news that the noise from wind farms causes cancer but the fake media never reports that – go figure! Those farms spread the virus too. That’s why democrats love them”.

“Ask any scientist and it’s a known fact. They’ll tell you wind farms not only spread the virus, they spread fires too. I think Fauci told me that. That’s why California’s burning!”

He also claimed the democratic party is in the pay of China.

“Our sources, and they’re all top sources? They tell me China sends big bucks to finance abortion farms. Everybody knows this but not many do! The rest goes straight to the democratic party. Ask anyone.”

Responding to the claims, Joe Biden said “President Tantrum has thrown his rattle out of the pram again but come November, you can help me jam it up his ass”.

That, he added, is the only way to silence him.