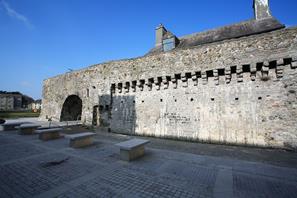 “I may have been a borrower or a lender or something like that,” Fintan ‘Finto’ Maguire said, “but all I’m saying is, don’t make the same mistakes I made.”

Sitting on a bench down by Galway’s Spanish Arch with the Prophet and Mary Gargle, Finto sucked hard on a can and said, “Yeah, a borrower or a lender maybe…but don’t hold me to that? Because I mightn’t a been either one a those things either. That might just a been a movie I saw.”

“I know I made my share a mistakes and I’m not ashamed to admit it…” he continued, racking his brain for examples of mistakes he’d made.

Suddenly he clicked his fingers and shouted, “Manrico! That horse was one of the biggest mistakes I ever made. Swing The Axe cost me a bundle too? And if you ever come across a donkey named Here Comes Charlie, walk away. Walk. A. Way! Every one a those nags let me down badly.”

After a brief pause, he muttered, “Least I think they did…truth is…it isn’t possible to recall all a the mistakes a man’s made in his life. Or even most a the details. One good thing I did though was marry dear old Margie, my wife? May she rest in peace.”

When reminded she was still alive, he jumped up and shouted “Holy Christ, I was supposed to meet her at the bus station!”