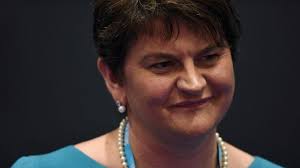 In a controversial move that has taken seasoned observers by surprise, the DUP has dropped its opposition to ‘the Devil’s music’ and adopted a Top Ten hit from the 80s as the party’s new anthem.

It’s understood that ‘the chosen frozen’ party’s MPs have agreed not to oppose its use in future referendums on abortion & same sex marriage rights.

DUP leader Arlene Foster claimed she herself had been young once but insisted she had never taken her clothes off.

“I’ve even taken to wearing an extra layer of clothing”, she explained, “whenever the BBC is ‘hosing us down with depraved muck like Strictly Come Dancing‘.

“Whatever must Her Majesty think!” she added.