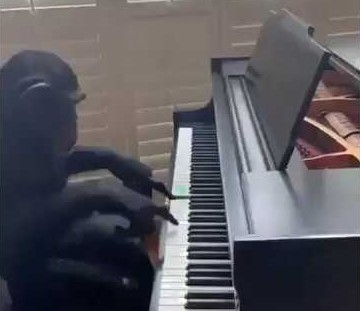 The three year old macaque said it was forced to entertain journalists after the video game press conference but ‘expressly forbidden from deviating from a fixed playlist of instrumental numbers’.

This was despite not only being a ‘monster bowie fan’ but also one that had written plenty of original material itself.

Pager surmised that “A drunken, narcistic, self-loathing primate, closely connected to the event, was the source of the hurtful rumour”.

The Elon Musk-owned mammal confirmed it had contacted reporters by WhatsAapp “behind the ringmaster’s back because we all know who the real star of the Circus Musk is, don’t we now?”

Pager said it was particularly annoyed by the AP report because it had specially reinterpreted Life on Mars for the SpaceX mission to the Red Planet “but of course, 420 wasn’t having any of that!”

Following the last fiery explosion of a SpaceX rocket, Pager confirmed it had recorded an instrumental version of Ashes to Ashes that prompted Musk to threaten to send it up in the next one, if there were any more Bowie covers.