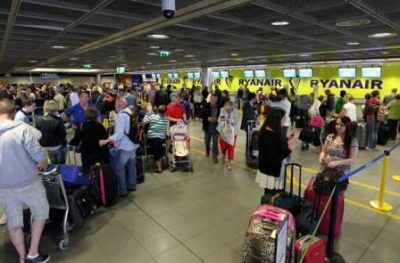 Ryanair attendant Mary Costello is ready to swap the glamour of international airline travel, for better working conditions as a registration agent at a refugee camp.

“Concern told me I had the perfect skill set for processing weary, frightened and dehydrated people who have been forced to stand in line for hours”, Mary said, “worried they’ve lost everything while trying to console their crying children?”

Mary said it was a “dream job” for her, as the disaster relief agency will pay her a fixed, minimum wage salary and supply her with her own camp bed, something she never had in five years of ‘jet setting’ between Birmingham and Beauvais.

“All my friends say I should write a Sex and the City book, set in the skies? And call it Sex in the Skies…even though I’ve never had sex in the skies.”

Mary says she will always miss the battlefield camaraderie of her Ryanair days but that her new job provides enough stability to allow her to settle down and have a family, something she always wanted to do.

Still, she admits, she’ll never quite be able to watch a Ryanair advert, without a flashback.