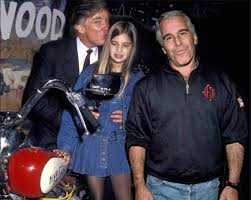 The conspiracy to murder the disgraced child trafficker Jeffrey Epstein has concluded he hanged himself.

It also found there is no evidence whatsoever to suggest Epstein introduced Trump to his wife Melania.

In a separate development, the first lady denied she ever complained she was misled about the state of Trump’s health when she married him.

Speaking off the record to ‘close friends’ she said, “I need you all to deny I ever said ‘I was guaranteed he was a snort away from a heart attack when I met him!'”