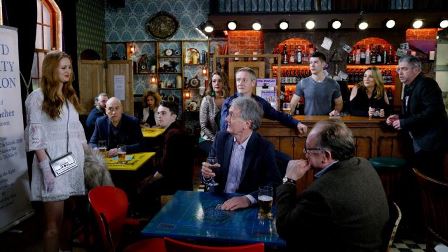 “I remember it like it was yesterday,” Fair City extra Donal Healey told everyone he met this week.

The 51 year old, (seen above in the far background on the left, during his only appearance on RTE’s hit soap), was enjoying the saturation coverage that followed news of the death of Ireland’s greatest broadcasting legend.

“We both arrived at the lift doors at exactly the same time,” Healey revealed, “but I said ‘After you, sir’.”

“He looked right through me, as he got in,” the amateur thespian continued with a chuckle, “it was vintage Gay!”

Donal added that Gay was ‘in complete command of the situation,’ as he flicked through some papers and waited for the lift doors to close.

“Still,” the Fair City extra speculated wistfully, “I’d like to think it was just his way of saying thanks…”