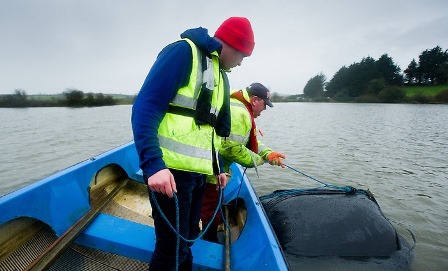 Flood-weary Clare farmer Gerry Murtagh has applied for a licence to convert his 20 acre holding into a freshwater prawn farm.

Murtagh said he expected to be given the go ahead, since he’s chin-deep in water, more often than not.

“Waist-deep, I could cope with,” he reflected, “but this crack is madness. Beef is out of the question but fresh water prawns would be an option”.

Warming to his theme, he said “Most of the farms around here are under some of the purest water in the world.”

“If we were lucky,” his son Damien said, “we might attract a dolphin? Bejaysis, we’d be pullin’ it in then!”