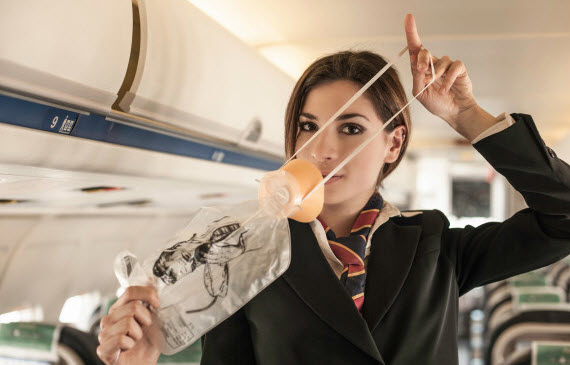 Film critic Maynard Druckert tonight panned the robotic delivery of the pre-flight safety demonstration on his evening flight from Newark to Boston.

“Even allowing for the wooden script, this was an utterly sterile performance by Alison Ryan who seemed to be asleep on her feet.”

“There was zero interaction, much less chemistry, between Ryan and the other attendant at the front of the plane whose name to this day, remains a mystery. It was as if they were simply going through the motions. And in the crucial ‘emergency’ scene where the oxygen masks drop down, there was little or no alarm on their faces,” the veteran film critic noted.

“Are we really supposed to believe the lives of everyone – including the flight attendants themselves – were at risk? Nothing about this walking dead, by-the-numbers performance, felt real.”

“It was a very pleasant release indeed when this grisly, poorly executed spectacle, eventually ground to a halt. Leaving this reviewer singularly unimpressed.”

After the flight landed at Logan international airport, passengers say a by then incoherent Druckert was stretchered off the plane, alternately shouting ‘the horror, the horror’ and weeping like a motherless child.