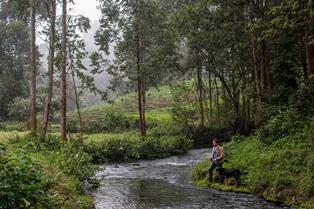 Retired CIA agent Daniel Hardy says he expects a call from Langley ‘any day now’, to help a strong but sexy NYPD detective with whom he will initially clash, catch a sniper, serial killer or suicide bomber.

“I expect there’ll be a couple of bust-ups before we earn each other’s mutual respect,” Dan mused, looking suitably moody while fly fishing on a new England stream; an activity he said would be regularly used to signal he was wrestling with an ethical dilemma.

There was sure to be a link with the ‘wet work’ he used to do for the CIA, he pointed out, which would probably mandate a montage before he gets to shoot anyone.

Hardy who refused to pose for a clear photo, citing ‘agency rules’, added that his ‘manly name’ was bound to work in his favour when it came to ‘the merch’.