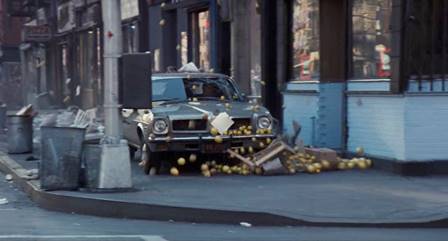 The San Francisco Street Vendors Association has called for an end to high speed chases that force fruit sellers to display open mouthed astonishment, before jumping for their lives.

Delivery men who carry large sheets of plate glass, are expected to support the call.

Under the current regulations, vendors are legally required to emerge to shake a fist at the departing vehicle, before being forced to dive out of the way of the pursuing car.

In addition to calling for compensation for members who’ve suffered a lifetime of cuts, scrapes and bruises, the association has condemned the destruction of thousands of tons of fruit and veg.

The association says the practice has made it legitimate for millions of cinema goers to laugh at the suffering of stall owners who are almost entirely migrants.

“Ever since Steve McQueen starred in Bullit in 1968,” a spokesman said, “a little over 50 years ago, street vendors have had to put up with a cavalier disregard for their lives”.