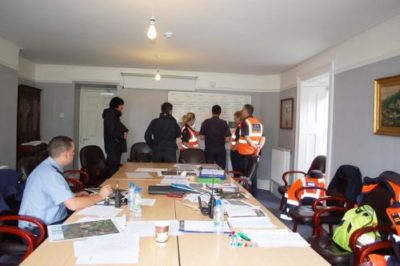 “Bruce, Frederick, Joseph Springsteen kicked off the European leg of his Born in the USA tour at Slane Castle,” he told this reporter, “in the year of Our Lord, 1900 and 85. End. Of. Story.”

However Sgt Buggy stressed news of the breakthrough was “embargoed” until it was confirmed. “I have to keep my voice down,” he whispered, “because I’ve a tenner riding on it with the new lad?”

Subsequent inquiries revealed the new recruit’s status as the ‘pop trivia expert’ on the pub quiz team, may have led to him becoming overconfident.

However the sergeant predicted “a classic takedown when ‘Mr. Newby’ learns who’s the real boss round here, if you get me?” before hastily adding, “I’m saying that because Springsteen’s nickname is ‘the boss,’ like.”

When asked if any progress had been made investigating a recent spate of burglaries, Sergeant Buggy said at the top of his voice that he could not comment on ongoing investigations, before hanging up abruptly.