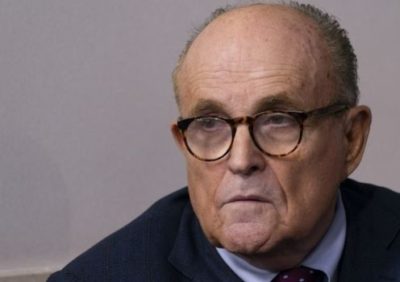 Former New York mayor Rudolph Giuliani has called Narnia for Donald Trump, claiming it takes him “over the line”.

Responding to press questions outside a Florida counting centre, he denied he himself had been ‘over the line’ recently when he accompanied a 25 year old woman back to her hotel room where he lay on the bed, fumbling in his trousers.

He again claimed he hadn’t been duped by the woman – Bulgarian actor Maria Bakalova who was playing the part of a TV journalist in Sasha Baron Cohen’s new comedy, Borat Subsequent Moviefilm – and insisted he had simply been “looking for his keys” in his trousers.

Giuliani abruptly walked away when a group of onlookers began singing the U2 hit, “I Still Haven’t Found What I’m Looking For“