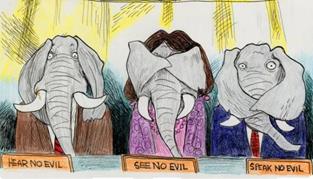 A majority of Republican senators contacted for comment on the George Floyd/Black Lives Matter protests, are too tied up to come to the phone right now.

Thirty nine republican PAs said “Oh that’s such a shame” because their bosses would have loved an opportunity to contribute to the debate but sadly will be on the phone until November.

Alaska Senator Lisa Murkowski confirmed she was still happily ‘struggling away’ over whether she could continue to support Trump.

The remaining two muttered incoherently about ‘law and order’ before shouting “What’s that?” and claiming they were needed in the next room.