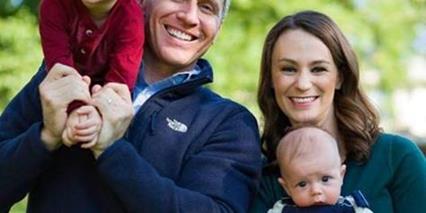 The scandal haunted former Missouri governor Eric Greitens has spoken movingly of the ordeal that forced him to resign in June 2018, after only 18 months in office.

Although Greitens claimed to have retired from politics “completely exonerated”, some questions remain unanswered.

Greitens addressed some of those questions, as he announced he will contest the republican nomination for the Ohio seat being vacated by senator Roy Blunt, who is to retire at the end of 2022.

In a moving and often emotional speech, he spoke at some length and without notes about the PTSD that had triggered his Navy SEAL training and brought him down.

Addressing the events of the tragic night in question, he explained that it was the stress of the job that led him to bind the hands of the ‘totally innocent’ hair stylist he was having an affair with, in between posing with his wife and children for the press.

Pressure that also led him to subject her to a ‘Guantánamo-level spanking’, before taking naked photos of her with which he subsequently blackmailed her.

“All of these were absolutely routine interrogation procedures,” he stressed repeatedly, “routine in every single way. Tactics designed by Arlington, to teach SEALS how to keep America safe by disorienting a captive and forcing her to reveal crucial intelligence, such as ‘who her Daddy was’.”

“To this very day,” he said quietly and with just a hint of a catch in his voice, “it remains my greatest regret that I was never able to extract an answer to that question.”

This direct and unusually frank appeal to the largely female audience his campaign team had assembled, elicited muffled sobs and a few calls to “Stay strong Eric”.

Greitens then moved on to reveal that he suffers from a popular, right wing medical condition, characterized by a profound sense of disorientation. One that prevents him from recognising the country he lives in, while still allowing him to remain certain it was not the one he had grown up in.

From now on, he pledged, he would be using his military training to take the fight to the same people responsible for bewildering so many decent Americans.

Greitens confirmed he still wouldn’t answer any questions on the accusations of charity fraud or campaign finance fraud that dogged his short term in office, nor would he address the issue of computer tampering.

“All these so called ‘issues’,” he said, “are simply the lies of the socialist party and its communist leader Joe Biden”.

During a subsequent press conference, former Trump advisor Steve Bannon told reporters, “Now that Eric’s hands are no longer tied, he has assured me, he will take no female prisoners in the fight to reclaim this great country of ours”.