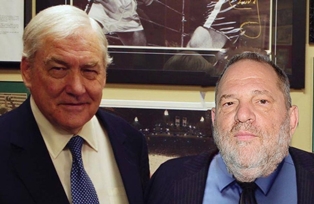 Donald Trump will pardon Harvey Weinstein, Conrad Black has predicted, “but only if he thinks it will annoy his political opponents enough”.

Black, the former media mogul who was jailed for fraud, was last night hired as a consulting editor on Weinstein’s new biography of Trump which is expected to set a new low in slobbering hagiography.

The plan has the blessing of Trump whom Black claims he can ‘clear’ copy with, in advance of publication.

Donald J Trump: Absolutely Not a racist, sexist, warmonger is to be published in October or sooner, if the undergrad researching it, can score enough Ritalin.

“I’ll read excerpts to the president over the phone,” Black boasted, smugly puffing on a cigar, “but I’ve warned Harvey he’ll have to make it disgustingly craven”.

“If that doesn’t work then he’s screwed…literally.”

“Which,” he winked, “ought to be a new experience for him?”