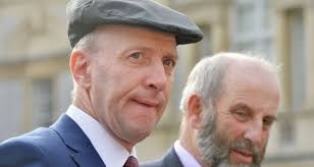 “This ssshhceeem will thrrrow a lifeline to the sshmal faarmurr,” his brother Danny Healy-Rae TD said, “which is very badly needed…for ta imprrroove…tha threadful sityooashin he’s in.” In follow up questions, both brothers reacted angrily to a Sunday Times journalist who accused them of being members of the Abbey Theatre Players group, on loan from a touring production of The Playboy of the Western World. The launch was abandoned after she played a recording of them speaking perfectly comprehensible English in private, in a light Kerry accent. The conversation revolved around the borthers’ chances of appearing on the reality TV show, Love Island.

An article later appeared on the paper’s website, headlined, ‘Brothers forced to deny ‘theatrical’ pronunciation, is an electoral gimmick‘. The paper said it was a taste of what it was like to be, “At home with the Screaming Healy-Raes, shorn of their usual thigh-slapping, pig-in-the-parlour antics”.