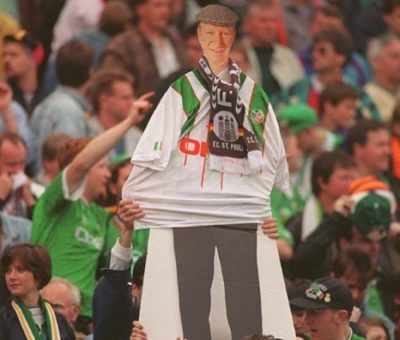 Like all of my columns, this one is rooted in another great but unrecognized paradox of Irish life which only I can recognise.

Because it’s my job to tell you poltroons what you don’t know about yourselves, so don’t even bother writing letters to contradict me – they won’t print them and you’re wrong anyway.

From the moment he first set foot on these shores, I shared Big Jack’s twin passions for Proust and the practicing of exquisitely elaborate rituals of diplomacy in our daily lives.

Never a man to say one word where three would do, he sometimes combined his diplomatic sallies with a quotation from the great French novelist.

Once when asked for comment after a dismal at home draw against a team of wandering Baluchistan minstrels and stamp collectors, he simply smiled and in his trademark whisper, replied, “It is often hard to bear the tears that we ourselves have caused”.

I smiled because I knew that I, and I alone, had picked up on the Proustian origins of that wonderfully nuanced answer.

Eamon Dunphy was utterly baffled by it, of course, but I knew then that soon Jack would teach us all to play the tin whistle in a way that would eventually allow us to forgive ourselves for being Irish.