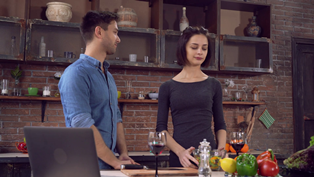 In a scenario that wife Elaine claimed had now become standard, newly wed Brian Feeney was forced to answer a humiliating series of yes-or-no questions about the existence of good and bad news in relation to the completion of a minor domestic chore.

The 32 year old then moved swiftly to correct the record over his latest failure to do ‘the one little thing he was asked to do’.

After he’d completed loading the dishwasher that led to their dispute, a chastened Feeney confessed to being “quite surprised,” at his wife’s expectation of a higher rate of domestic competence, than she was experiencing.

“If I’m honest,” he added, “I’m hoping she’ll be able to adjust to the situation soon because that’s what marriage is all about?”

“Otherwise,” he said, “that really would be bad news?”