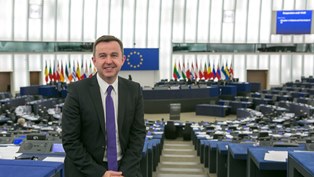 Fine Gael MEP Brian Hayes issued a stark warning to supporters of Irish neutrality today when he reminded them that “if Ireland can’t be bombed during another world war, we’ll all know who’s to blame.”

Hayes, the internationally renowned public intellectual at the heart of his party’s campaign to persuade voters to abandon neutrality, called for ‘an honest debate’.

What certain people don’t seem to realize, the fearless iconoclast pointed out, is that ‘if we’re not very careful’, this country could once again miss out on all the action, “next time the balloon goes up”.

The Fine Gael firebrand said “There are those who make wild claims that simply because we are part of a military alliance, we could be sucked into a regional war or even another world war”.

“As if joining a military alliance could ever lead to us having to help our allies mount military attacks on countries from whose attacks we subsequently could not defend ourselves and whom we might have had no business going to war with in the first place.”

“How on earth could abandoning our neutrality,” he demanded, “expose us to that sort of thing!”

What was needed, Hayes bravely warned, was “a more mature approach.”