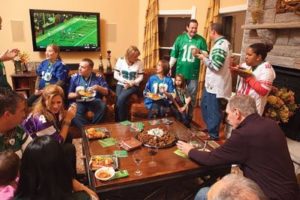 Retired Boston policeman Brian Sheehy’s Super Bowl party was ruined by his son-in-law who kept asking the close band of patriots gathered for the event, about the deep state.

“He’s my son-in-law,” the Irish American grandfather had to explain to one purple faced guest after another, “what am I gonna do, shoot him?”

In the background, well lubricated Dubliner Donal Healey (seen above wearing a green jersey) could be heard speaking animatedly.

“All I wanna know is, if it really exists and it’s really all powerful, then why didn’t the deep state just fix it so he couldn’t be impeached the first time, never mind the second?”

“Because that would be too obvious,” MAGA hat wearer Walter Kennedy screamed back, “Ok? It doesn’t work like that. It can’t be too obvious or it won’t work!”

“But you just told me the deep state can do whatever it wants, whenever it likes,” Healey pounced, “and nothing can stop it.”

He then walked away muttering “Jesus Christ, I don’t have to take this shit, Brian?“