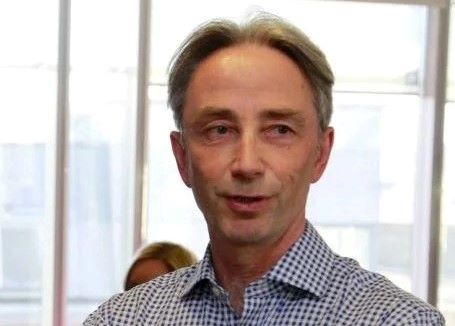 Resigning Irish Times editor Paul O’Neill today accepted the ‘Natural Home Of Middle-Class Angst’ award on behalf of the paper. The accolade has been won by the Times every year since it was first launched, in 1986. He said it was the ‘perfect honour and best present’ he could get, in his final month as editor.

The prize, which is sponsored by the Organisation for Economic Co-operation and Development (OECD), said ‘the paper of record’ has focused more on the urgent concerns of the middle class than any of its rivals, since Conor Brady became editor in 1986.

The presentation was made by OECD secretary-general Mathias Corman in the newsroom of the paper’s Tara Street offices. Accepting it, O’Neill called out to some of the paper’s best known names who had actually come into the building for the occasion, as if they were just rank-and-file desk jockeys. “Get up here Toolers,” he shouted. “You too Sheridan and Mullaly”, he added, gesturing to them to join him in the middle of the room.

“This one belongs to you fuggahs,” O’Neill then screamed. “Nobody does middle-class hand wringing better than we do – we’re the best opinionators in the world!” Suddenly, to the great surprise of those standing nearest to him, he sprayed cheap champagne all over them.

As a clearly disenchanted O’Toole began muttering about the paradox of the demise of the middle class, just as it was reaching the very peak of its influence, O’Neill snapped, “Can it Finto – RTE have arrived?” He then solemnly explained to RTE’s ‘Dobbo’ that, “This was campaigning journalism at its very finest, as exemplified by our campaign against the latte levy?”

Afterwards everyone went for lunch and took turns saying how much they admired each other’s work. And they all went home feeling temporarily validated.