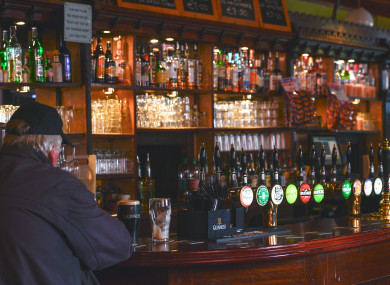 Addressing the back of the only other patron of the Ramble Inn this afternoon, legendary Galway bore Brendan Coyne observed, it was ‘all to play for’ on Sunday.

Coyne, also known as ‘the preacher of platitudes,’ interpreted the silence of ‘early drinker’ Thomas Joseph Guiney who was doing The Irish Times crossword on the counter, as encouragement to continue.

Although he appeared to droop slightly, Guiney did not reply.

“Dunmore have a couple a right wirey forwards, so they have,” Coyne continued, “but Francie Geoghan is a mighty man to win dirty ball…”

Guiney swung round on his stool and directed a searching stare at Coyne, before returning to his original position.

“You mightn’t think it,” Coyne said, brightly, “but Kilconly are a coming team?”

“Then I’m sure they’ll do their talking on the pitch,” Guiney sighed, without turning around, “especially if they’ve been written off all week. In fact, I wouldn’t be surprised if the cows weren’t milked as a result!”

Guiney stood to welcome barman & proprietor Eamon Halligan, as he returned from the cellar.

“I remember that bright April mornin’,” he serenaded Halligan, “I left home to travel afar“.

“To work till I’m dead,” Halligan warbled in reply, “for one room and a bed“

At which point Guiney pointed at Coyne, as he sang, “C’est la raison j’ai quitté Mullingar“.

As A Mother-Daughter-Sister-Lover-Woman, Should I Order You One Pint Or Five?