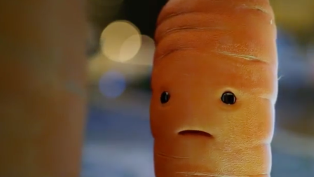 Kevin, the celebrity root vegetable, responded to press speculation over his future last night with a statement that expressed his sadness at the growing rift between him and the producers of Aldi’s festive campaign.

Kevin, who became the breakout star of the supermarket’s Christmas commercial, has confirmed he is ‘gutted’ by the company’s decision to drop him, on the basis of a single, anonymous complaint.

An Advertising Standards Authority spokesman said ‘We understand that Kevin is immensely popular with the influential 5 to 8-year-old demographic, however his association with the sale of alcohol was inappropriate’.

Kevin’s agent said he’d been forced to continue performing as the supermarket’s ‘alcohol mascot,’ despite having long outgrown the role he’d originally been hired to fill.

Heartbroken Kevin was in talks with Pixar, makers of Toy Story, to be Mr Potato Head’s sidekick in an exciting new spin off from the successful franchise when he learned he had been ‘canned’.

“A role like that would have been a dream come true,” he said, “for a working class carrot like me’.

Privately, creatives claimed success had gone to the charismatic carrot’s head. He had become aggressive and demanding, frequently warning the under 8 market would go ‘apeshit’ if he were to walk.