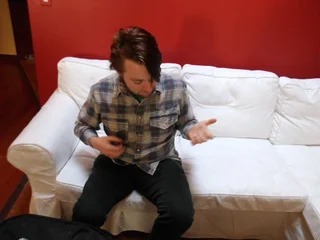 Legendary Galway bore Brendan Coyne has confirmed he may be facing charges over a series of 999 calls he made, to report the theft of a vintage Gibson Les Paul air guitar.

Blaming the incident on “lockdown fever and a little too much Lady Bucky”, Coyne said he now regretted involving the police “but hey? The road has a way of making you crazy”.

Coyne told police he had lent flatmate Ziggy O’Reilly his Gibson Super 400 – which in real life would be worth €14,000 – to jam on, while he ‘laid some cable’ but that when he returned, his flatmate was asleep on the couch and the prized guitar was ‘nowhere to to be seen’.

After rousing him, he told gardai his flatmate ‘eventually handed me back ‘a crummy Gibson Les Paul Junior, which in real life would be worth just €1,300′.

Coyne, who “only took up air guitar as a way to meet girls,” also complained that he couldn’t understand why ‘real guitar’ was taken more seriously than air guitar.

“Hendrix was applauded for playing feedback, for instance but I’d like to see him try that on an air guitar.”

“And Pete Townshend would more than have his work cut out for him,” he shouted as he was taken away, “trying to smash one?”