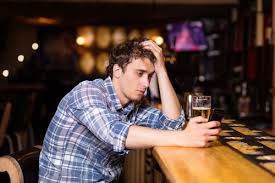 “In my heart, I still love her deeply,” newly married Tod Evans told best friend Cliff Hayman, “but I feel like my penis doesn’t”.

“Has that ever happened to you and Lilly?”

Hayman whose empty, lifeless marriage was largely a secret from his friend, admitted that “Sure, sometimes marriage can be tough but ya gotta push on through buddy” before frantically signalling the barman for two more boilermakers.

“I mean, I suppose I’ll have to hump her,” Tod continued, “An anniversary’s an anniversary, after all. But Jesus, even thinking about her sister doesn’t work any more, you know?”

Hayman made a noise commensurate with the deepest sympathy for his predicament – and the fullest admiration of Mrs Evans supple younger sister – as he drained his glass and pushed another shot in front of his friend.

“Best thing a man can do in these situations,” he advised, “is to stoke the furnace up with a few of these babies and then go home and plug her without putting the light on? Meg likes to pretend I’m a burglar”.

In the silence that followed, Tod looked Cliff straight in the eye, until eventually, he cracked and mumbled something about The Steelers truly being a ‘band of brothers’…