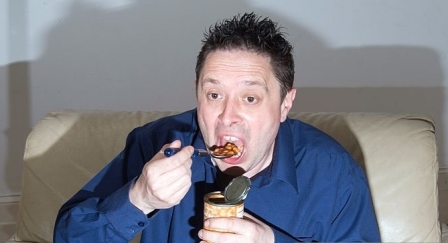 Part time supermarket worker Adam Walley (27), ate beans out of a tin this afternoon, in a display of Great British defiance of the Brussels bureaucrats his great grandfather had proudly fought “on the beaches and in the fields” of two world wars.

Walley alternately screamed “Brexit means Brexit” and “Taking back control” at his TV, while wolfing down the beans.

Afterwards he continued drinking one of British Great Britain’s supermarket own-brand lagers in the inimitable fashion of Great British Britons that is widely acknowledged to be the envy of oily foreigners everywhere.

Eventually, after several attempts to say “We shall nevah surrendah” in a suitably Churchillian tone, he surrendered to an extended attack of the hiccups.